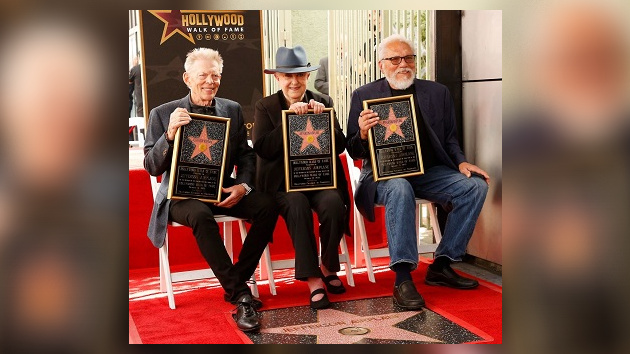 Jefferson Airplane was honored with a star on the Hollywood Walk of Fame on Thursday, and the three surviving members of the influential San Francisco band’s classic lineup — singer Grace Slick, guitarist Jorma Kaukonen and bassist Jack Casady — attended the ceremony.

Hollywood Chamber of Commerce chair Lupita Sanchez Cornejo, who emceed the event, then read a proclamation declaring it Jefferson Airplane Day in Hollywood.

Slick, who hasn’t appeared in public very often in recent years, began by declaring, “I am one lucky b****. I’ll tell you why. Jack and Jorma are … real musicians. I’m a screw-off who got lucky.” She then explained how, with little experience, she decided to be a rock singer after seeing Jefferson Airplane play in a small club and soon formed her own band, referring to her pre-Airplane group The Great Society.

“It turns out I did have the right voice for rock ‘n’ roll,” Slick noted. “It’s very loud, and I didn’t have any trouble singing over people.”

Also during her speech, she thanked a close female friend who she said saved her life a couple of months ago, revealing the friend got her to a hospital after she’d gone into septic shock.

In addition, Slick pointed out the hat she was wearing belonged to Kantner, who was the father of her only child, daughter China Kantner. “At least his DNA is here today,” she quipped.

You can watch the whole ceremony on the Walk of Fame’s official YouTube channel.